Buyers Getting Some Relief as Inventory Increases 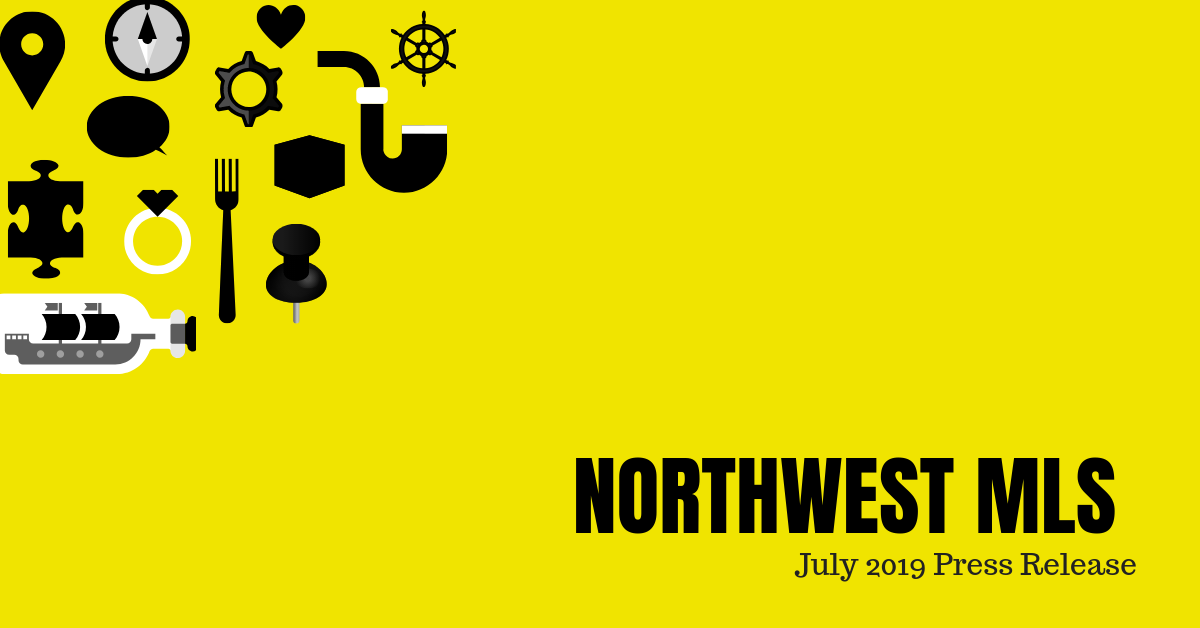 KIRKLAND, Washington (July 8, 2019) - Inventory, pending sales and prices all increased during June compared to a year ago, according to the latest report from Northwest Multiple Listing Service. The same report, which covers 23 counties in Washington state, shows year-over-year drops area-wide in both the volume of new listings and closed sales.

"Clearly we now see that the market is moderating - that is we're definitely moving from a 'hyper-market' to one where a correction is underway compared to last year," remarked Mike Grady, president and COO of Coldwell Banker Bain. "While it's the best time to buy that we've seen in some time, and buyers are getting some relief, it is still a seller's market," he added, noting some buyers are experiencing multiple offer situations, or considering inspection waivers, or are even forced to consider markets outside King County for affordability.

MLS figures show the median price for single family homes and condos that sold last month in King County was $637,675.

About half the counties reported gains in inventory, led by King County where the selection grew nearly 32 percent from a year ago.

Northwest MLS figures for King County show there were 5,931 active listings at the end June, the highest for that month since 2012 when the selection totaled 6,500 listings.

"Every summer, we see the highest level of new listings and homes going under contract. After the surge of new listings in May, areas close to the job centers saw listings return to the normal seasonal pattern in June," commented J. Lennox Scott, chairman and CEO of John L. Scott Real Estate.

The Northwest MLS report indicates there is 1.76 months of inventory area-wide (matching May), with eight counties having less than two months of supply.

OB Jacobi, president of Windermere Real Estate, commented on a "considerable rise" in the number of listings priced above $1.5 million in King County. "This could be because of the changes to the Washington State Real Estate Excise Tax (REET) that take effect in 2020, which will significantly impact the tax burden of sellers whose homes sell for more than $1.5 million. I suspect we'll see even more owners of higher priced homes trying to sell in the coming months in order to avoid the hike in taxes they'll have to pay starting next January," he stated.

The new tax measure changes the REET rate from a flat 1.28 percent of the selling price to a graduated rate for real property sales, with exceptions for timberland and agricultural land.

Commenting on the latest report from Northwest MLS, WCRER's Young said "The perfect storm of low interest rates and falling inventory continues along the I-5 corridor, with double-digit house price increases also continuing."

Beeson says the "new normal" inventory levels of 2-to-3 months of supply, rather than the traditional 4-to-6 months, makes Puget Sound different than most of the rest of the nation. In Puget Sound, homes sell twice as quickly as a traditional 'normal' market," he stated, but acknowledged, "It feels kinda like things have slowed down. Folks are taking deeper breaths."

Several brokers commented that buyers are becoming more deliberate in their searches and offers.

"Market savvy buyers are taking advantage of premium location and value pricing due to increased inventory. Price reductions are more commonplace as sellers align their expectations with today's market," according to Deely. He said demand remains strong, but "buyers are methodical in their search, and taking more time to jump into an offer." Also, he noted there have been fewer multiple offers and fewer all-cash buyers in the mix when a listing has several buyers lined up to compete.

Buyers are more "tuned-in" than ever before, Beeson remarked, adding, "Buyers today have educated themselves on the vagaries of the home buying process and are better prepared to meet sellers on firmer ground. They are attentive, vigilant, and discerning toward the marketplace, knowing what they want in a home - and they are willing to wait longer to get it."

Leach concurred. "Buyers are being very careful about what they buy and at what price," he stated.

Scott also expects a "quick-action market" for many buyers when new listings come on the market, especially with interest rates in the upper threes. Looking to the months ahead, Scott anticipates strong sales activity close to job centers, while the surrounding area will experience intense, "frenzy-level sales activity" in the more affordable to mid-price ranges.

Larson believes "the big three" - interest rates, the economy, and consumer confidence - all point to a strong summer for the housing market, while contrasting King and Pierce counties. "For years, King County has been a bit like a top fuel dragster - high performing, thrilling, but maybe a bit temperamental. It got the headlines and values skyrocketed, but now it's experiencing a bit of a hangover. Pierce County's market is more like a diesel truck - steady, consistent, and less prone to dramatic market changes."

Several representatives from Northwest MLS also suggested sellers need to learn the "new normal" as Beeson calls it. "If you overprice your home or fail to get it in good condition for selling, it will cost you time and money in the end, he stated, adding, "Seller's can't afford to be tuned out to what the market is saying."

Condo activity was mixed during June with year-over-year declines in the number of new listings added to inventory, as well as in the volume of pending and closed sales. Total inventory grew more than 41 percent, although at month-end there was only about 1.9 months of supply. Prices overall were nearly unchanged from a year ago. The median price for June's sales was $367,000, up about a percentage point from a year ago when the median price was $363,500.

Northwest Multiple Listing Service, owned by its member real estate firms, is the largest full-service MLS in the Northwest. Its membership of around 2,300 member offices includes more than 29,000 real estate professionals. The organization, based in Kirkland, Wash., currently serves 23 counties in the state.