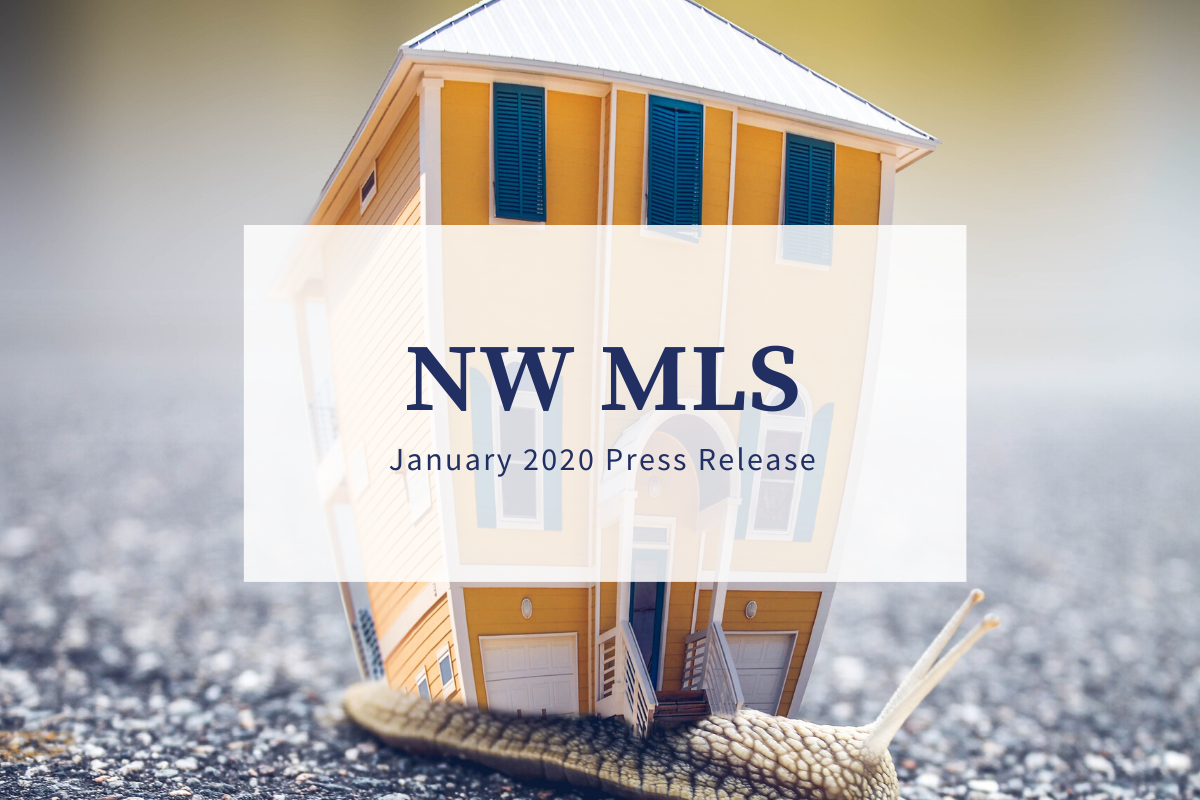 KIRKLAND, Washington (January 6, 2020) - "The buyers are out there and are showing up at open houses and making multiple offers on new listings," was how one industry leader summarized December's housing activity involving members of the Northwest Multiple Listing Service.

Newly-released figures from Northwest MLS show inventory at the end of December was down 31% from the same month a year ago, with only 8,469 active listings compared to the year-ago total of 12,275. The figures include single family homes and condominiums across the 23 counties in the MLS service area.

Last month marked the sixth straight month of declining inventory, noted James Young, director of the Washington Center for Real Estate Research. MLS figures show inventory peaked in June when the database had 16,680 active listings about twice as many as December.

Robb Wasser, branch manager at Windermere Real Estate/East and NWMLS director, noted the sharp drop in King County marked the first time since March 2018 that the supply of homes dropped below one month. "Looking all the way back to 2012 when home values first began recovering, King County has only logged six months with supply levels lower than where we currently stand," he remarked.

December's volume of active listings included 3,777 new listings added during the month, but during the same timeframe, 5,943 sellers accepted offers on their properties. That number of pending sales was up about 4.7% from twelve months ago.

"December 2019 proved to be better in just about every single category than December of 2018 - this notwithstanding weather that was not as mild as 2018, and weather typically has an impact on sales."-Mike Grady, president and COO of Coldwell Banker Bain.

"Historically low interest rates and strong job growth continue to drive the Puget Sound housing market, which is already sizzling as we begin the new decade. In the more affordable and mid-price ranges, many areas are seeing frenzied sales activity with multiple offers on most properties."-J. Lennox Scott, chairman and CEO of John L. Scott Real Estate.

"December was one of the most active in recent years with an unusual number of ready, willing, and able buyers in the Seattle market. These buyers were competing for little inventory as the year ended."-John Deely, principal managing broker, Coldwell Banker Bain.

"December was a bit of an anomaly in the King County real estate market. Although appreciation has slowed considerably from the 14% or so annual appreciation increases that we experienced during the market frenzy years, inventory continues to get tighter. We experienced very high demand for housing." - Gary O'Leyar, designated broker/owner, Berkshire Hathaway HomeServices Signature Properties in Seattle.

Northwest MLS member-brokers recorded 7,093 completed transactions during December, a gain of more than 11% from the 6,374 closed sales of the same month a year ago. Prices on last month's closed sales of single family homes and condos rose 8.75% from a year ago. For the MLS market overall the price was $435,000 versus the year-ago figure of $400,000.

In King County, which had the highest volume of sales and the highest prices, the median sales price for last month's closed sales was $615,000. That was an increase of about 3% from a year ago. Prices in King County peaked in May at $645,000.

Deely, a member of the NWMLS board of directors, reported "unusually brisk activity" in the luxury market as the year wound down, with several multi-million-dollar sales coming in all cash with less than two-week closings. Another noticeable trend he cited was foreign buyers and sellers anxious to complete buy-sell transactions before year end. "If this is any indication of the 2020 market, then we will be moving more towards the blistering market of 2017, swinging away from the more balanced market of 2019," he proclaimed.

Some brokers expect the pressure on prices to ease during the first quarter of the year as inventory improves.

"We will see increased new inventory in the 1st quarter of 2020 resulting in a better selection of homes," declared Rebhuhn, who added, "Buyers should be ready to supply sellers with pre-qualification letters including satisfaction of major underwriting elements."

Scott said some relief should be on the way as the weather warms up and sellers choose to put their home on the market, but he also cautioned it's possible the trend of fewer resale listings than usual will continue on the Eastside. He described the Eastside housing market as "particularly hot," adding, "It shows no sign of slowing down anytime soon with recent job growth announcements and an extreme shortage of unsold inventory priced up to $1 million."

Brokers in several counties outside of King County also commented on inventory shortages and the velocity of sales.

Leach also noted rentals are very tight with new apartments rented as soon as they are finished. Builders are "chasing the market with most of their inventory being sold before they are finished," added Leach, a member of the Northwest MLS board of directors.

Young said December's double-digit price increases in several counties reflect the long-term trend of increased interest along the I-5 corridor.

Grady said, "With inventory below one month in King County, we can only surmise that 2020 will show a return to rising home prices as a result of the lack of inventory and continued robust job market. While buyers will continue to benefit from low interest rates, there are simply not enough homes for sale. These predictors indicate that the first quarter of 2020 will be active."

"Clients often ask for our 'crystal ball' projection regarding the direction the real estate market is heading," stated O'Leyar. He tells them "Follow the employment numbers," citing State Employment Security Department reports showing the unemployment rate in King County for November 2019 was 2.3%, the lowest rate for any month measured since January 2016 and the highest employment rate since November 2017.

"The only sound reason for waiting to buy real estate in the Greater Seattle market now would be finding the suitable home versus anticipating the market to get any less challenging for buyers in the near future," O'Leyar remarked.

Northwest Multiple Listing Service is a not-for-profit, member-owned organization that facilitates cooperation among its member real estate firms. With more than 2,300 member firm offices and 30,000 brokers across Washington state, NWMLS is the largest full-service MLS in the Northwest. While based in Kirkland, Washington, its service area spans 23 counties and it operates 20 local service centers.