Uptick in Home Sales and Prices in November 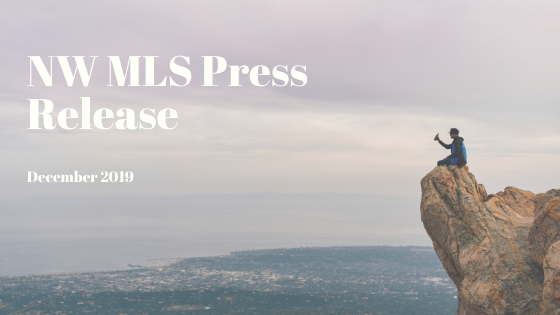 Uptick in Home Sales and Prices in November

KIRKLAND, Washington (December 5, 2019) - Brokers with Northwest Multiple Listing Service (NW MLS) reported "plenty of buyers" competing for sparse inventory during November, which ended with a 7% year-over-year increase in pending sales. The volume of mutually accepted offers rose even more (9.2%)  in the tri-county Puget Sound region consisting of King, Pierce and Snohomish counties, with Snohomish leading that list with a jump of about 12%.

Median sales prices also jumped compared to both a year ago and to October. For November's 7,216 closed sales (which were up 5.5% from a year ago), the area-wide sales price was $434,900, a gain of about 10% from the same month a year ago. Compared to October, last month's price on sales of single family homes and condos (combined) jumped 3.5%.

King County's median price of $612,000 led all other counties, but prices there edged up just over a percentage point compared to a year ago.

"Just when I thought we had started a 'new normal' that equalized things a bit for buyers, we've had a 'November Surprise,'" said Mike Grady, president and COO of Coldwell Banker Bain. "Perhaps it's an aberration, but perhaps not," he suggested.

November's 7% increase in pending sales was the highest year-over-year gain for November since 2016. In 2017, the YOY figure was a modest 1.6%, while last year's comparison showed a drop of more than 10%.

Brokers could not replenish inventory to keep pace with demand. "New listings added to inventory retreated nearly 15%," Grady noted. MLS members added 5,437 new listings system-wide, far fewer than a year ago when they added 6,399 residential properties to the MLS market area that covers 23 counties. The imbalance between new listings and pending sales resulted in supply falling to 1.58 months, the lowest system-wide level since last December.

"Pending sales, along with other indices I watch, including the number of surrendered out-of-state driver's licenses, construction crane activity, and the 11 million square feet of office space under construction that is already 90% leased, bolsters the idea we may be seeing our region's economy strengthening - and we weren't in a lull," proclaimed Grady.

"The housing market is virtually sold out in the more affordable and mid-price ranges where 75 percent of sales activity occurs in each market area," remarked J. Lennox Scott, chairman and CEO of John L. Scott Real Estate. With December typically marking a low point for new listings coming on the market, and the lower level of unsold inventory, Scott said "the pressure is on despite the winter chill." This pressure is sending prices higher in the more affordable and mid-price ranges, according to Scott, who does not expect any easing until spring when new listings begin to increase.

James Young, director of the Washington Center for Real Estate Research, commented on price rebounds in Pierce County. "Some parts of this county only recently reached price levels higher than 2007. Now they are rapidly catching up with other areas. It continues to be one of the hottest markets in the U.S."

"While much of the U.S. has seen declines in pending sales, not so in Puget Sound," declared Dick Beeson, a member of the Northwest MLS board of directors. He points to the year-over-year gain in pending sales in the tri-county area (up more than 9%) and the sharp drop in active listings (down more than 34%), describing it as a perfect storm. "Sellers won't come on the market because they think they can get more in the future or they have nowhere to go, and buyers, who have tried to avoid bidding wars, often mistakenly think they can sit back and pick and choose, looking for bargains."

Beeson, the principal managing broker at RE/MAX Northwest in Gig Harbor, said the news for buyers is, if there's a bargain out there, others will find it too, and they'll be competing once again. He said some sellers also have unrealistic expectations if they think they need not do improvements before selling. "The news to sellers is buyers are looking for move-in-ready homes. They don't want to 'fix it up' after they move in."

The latest NWMLS report shows considerable variation in activity among counties and sub-markets. Twelve of the 23 counties in the report had year-over-year drops in the volume of closed sales, but only three counties reported declines in median sales prices. Price changes ranged from a drop of nearly 8% in Pacific County to a gain of 17.4% in Clallam County.

Similarly, the condo segment, accounting for about 13 percent of last month's activity, had mixed results. Inventory remained tight, with 19.8 fewer new listings added during November than the same month a year ago. The number of total active listings slipped more than 23% compared to a year ago.

NWMLS brokers tended to shrug off this year's seasonal slowdown, while cautioning procrastinators.

"As we head into the winter months we're seeing the normal tapering off of demand, but there are still plenty of buyers in the market so I don't expect things to slow down too much," remarked OB Jacobi, president of Windermere Real Estate. "Looking forward, home prices will likely end the year higher than last year, but not by much. Price growth should pick up some steam again in 2020 thanks to low interest rates and continued demand for homes," he added.

If mortgage rates stay below 4%, while prices rise and inventory remains tight, Grady says "We could see a real estate market in 2020 that is even stronger than 2019 with homes prices increasing again, perhaps even 7% or more."  That's good news for sellers, he stated, adding, "Buyers should think about taking advantage of these record-setting low interest rates now."

Leach agrees. "Now is the time to buy or refinance while interest rates remain at all-time lows. Well valued and priced inventory will sell rapidly across the holidays and into the winter season."

"How can buyers not take advantage of the lowest interest rate environment in decades?" wondered Dick Beeson, adding, "The psychological highs and lows surrounding buying or selling a home today are tremendous. Both buyers and sellers need solid advice from a professional who can filter the noise and help them make intelligent, informed decisions."